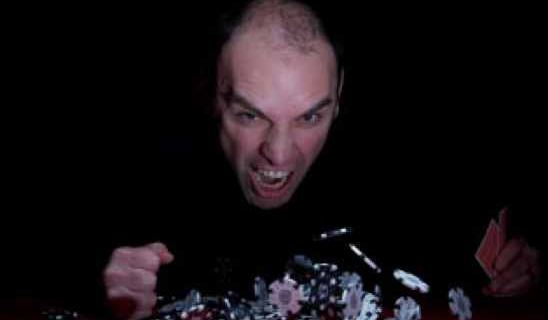 We have all seen this type of situation before:  After being dealt pocket aces, you open up for a raise and get a caller form the button. The flop is [AC], [5D], [7H] and you think “Bingo!” You check the flop and the button puts in a big over-bet. You have a hard time trying not to salivate as you check-raise your opponent all-in. He calls showing [7S] and [9D], a broad smile falls across your face. The turn is the [8C] but you do not flinch since he only has a four cards in the deck to hit his gut shot straight. When the [6D] hits the river, it doesn’t faze you until you see the chips slide over to his side.

It’s situations as described above that have single-handedly been responsible for thousands – maybe even millions – of dollars in damages from irate players who can’t believe their luck. A lot of this anger is due to a natural human instinct to find someone to blame after believing you did everything right to avoid said circumstance. Some blame their opponents’ bad play while others will insist the site is “rigged” against them. The simple truth of the matter is that the players have no control over the final outcome of cards. It is relatively rare, when comparing all poker hands ever played, to have situations where you are a 100% favourite to win. All a player can do is try to get into a position to be the favourite and hope that the cards fall your way.

It is very easy to forget the amount of times you have won holding the best hand but the same cannot be said for when you are dealt a bad beat. Due to the more dramatic results of a bad beat, those memories tend to stick out in front – especially if they were critical moments in the game. In the classic case of all-in pre-flop against one other opponent while holding aces, losing to an inferior hand can be especially be tough to handle. However, winning or losing a single hand of poker is not important when considering a long term strategy.

The focus, instead, should be on making the correct decisions. If you were able to convince an opponent to make a mistake while holding the best hand, then you’re playing winning poker. Even if you get unlucky with the outcome of the cards, you can rest assured that you have an edge on your opponent and it will only be a matter of time before those chips slide over to your side of the felt.